"WAR IS HELL; SHOWBISNESS IS WORSE"

The first time I ever had heard of Pancho Villa, was from a Young Indiana Jones movie. Many of us, however, can recall Villa's part in the Mexican Revolution from history class back in middle school. My memory of film and Villa is closer to actuality than I had anticipated. See, Pancho Villa (born Doroteo Arango) was just as much of a raging war soldier as he was a silverscreen star. "In 1914, Villa signed a contract with the Mutual Film Corporation of New York that essentially sold the movie rights of the revolution to Mutual for $25,000 and a share of the profits." (link 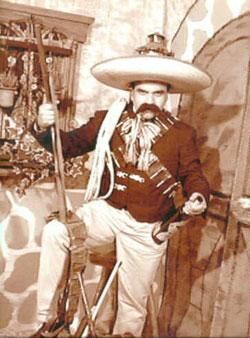 ). In essence, Senor Villa sold the rights for his expedidtions and war episodes to be documented, filmed, and produced into a movie. Pancho was the actor, "...the stage was the Mexican Revolution, and the show centered on Villa's band of guerilla fighters waging war against soldiers of the Mexican government."

link ). It turns out filming a real, live-action war isn't as easy as Pancho would have thought. Well, there's a surprise! "Actual filming of the revolution was a little more demanding than either Villa or the movie company expected. Villa's army was essentially put on a production schedule that called for battles to be fought between 9 a.m. and 4 p.m. Usually the schedule for production is between 10 a.m and 6 p.m. (not before, or after that time). The cameras were rolling when Villa and his men rode into Ojinag, but cheif cameraman L.M. Burrund was not ready and Villa's men had to wait around for a director to call "Action!" before the assault could begin." (link ). So, as "...moving picture camera crews had covered the major military actions from the Spanish American to the Balkans War..." (link#2 ) Pancho Villa and his crew put on their battle faces and began each day as men of military and hollywood. It was even stated that, looking closer into "...Villa's contract...[it] obliged him, in exchange for consideralble compensation, to carry out his attacks in the best light or angles for the cameras." (link#2 ). In the end, Pancho's extraodinary efforts expressed in real-life came out to be rather ordinary in film. "Harry Aitken, head of Mutual, complained that the final version showed way too much of Pancho Villa strutting his stuff for the cameras and not enough actual warfare. Aitken went to Mexico personally to deliver his review of the movie and Villa's role in it." (link ). Villa was offered a second chance--a complete remake--to redeem the film's (not to mention Villa's) integrity and value. "Villa happily agreed and promised the studio a much better war the second time around." (link ). The cameras, this time around, followed Villa and his men through escapades, murders, pillages, and plunders in reaction to America backing up the beliefs of the Carranza governement in Mexico. Then, Villa had a rather interesting dealing with weapons, and his notorious character was feared of everywhere on the Texas-Mexican border. By 1920, Villa threw his cards down, set aside his dealings, and took a break in a Mexican estate. Villa, born Arango, was assinated in 1923. "As for the filmed version of the revolution, the second version apparently wasn't any better than the first one. Legendary director D.W. Griffith got hold of the footage but he couldn’t do much with it either. The movie was released briefly but moviegoers stayed away in droves. Had he lived, Pancho Villa would have learned that, yes, war is hell but show business can be downright brutal." (link ).

Community content is available under CC-BY-SA unless otherwise noted.
Advertisement